There is a piece of legislation (HB 125) that is making its way through the approval process. We need your help to stop it! The legislation is flawed and just plain awful. Please go to the Utah Legislature website to find your senator and email them: https://senate.utah.gov/senate-roster/. It will only take a moment of your time and it could very well save the innocent lives of so many animals who have no voice. Be part of the difference!

What follows is some information on HB 125 and why it is flawed.

Premise 1. The language of HB 125 does not merely give the Director of the Division of Wildlife Resources (DWR) “more tools” for responding to below-objective ungulate herds as the bill’s supporters claim; to the contrary, it mandates that he or she take immediate action to instigate the killing of predators (bears, cougars, and coyotes) whenever an ungulate herd is below objective. Thus, the legislation eliminates the need for professional judgment on the part of the Director and, in effect, directs him or her. But who is going to direct the director, and for what purpose? Might it be overbearing sportsmen organizations such as Sportsmen for Fish and Wildlife, because they think it will maximize the number of big game animals for hunting?

Premise 2. Under HB 125, the only way the Director can avoid taking action to kill predators when ungulate herds are below objective is when DWR can PROVE that predators did not contribute to a herd being below objective.  However, it is obvious that so long as there are predators around it will necessarily be impossible to prove that they have no causal influence on ungulate herd sizes. Why? Because they eat ungulates! Similarly, it will be impossible to prove that precipitation has no causal influence on herd sizes because ungulates eat plants and plant growth is dependent upon water.  And this must be true no matter the size of a herd regardless of whether it is below objective, at the objective, or even above objective!  It will always be impossible to determine the precise extent to which predators contribute to the size of a herd because there are always numerous additional factors in play as well, including precipitation, wildfire, disease, automobile collisions, hunting, poaching, etc. – factors that vary in largely unpredictable ways from month-to-month and year-to-year.

Conclusion. Points 1 & 2 entail this conclusion: The Director of the Division of Wildlife Resources must instigate increased killing of bears, cougars, and coyotes on a hunting unit whenever an ungulate herd is below objective.

Now for the coup de grace: There can be no non-arbitrary method of setting herd population objectives. In other words, ungulate herd population objectives are aspirational – they are whatever DWR thinks can be achieved by manipulating features of the habitat (e.g., through pinyon-juniper removal), by manipulating predator and prey populations that use the habitat through hunting, and given certain assumptions about climate, weather, and diseases such as chronic wasting disease, etc.

Think of it this way: If the controlling powers want more deer to hunt, all they need to do is insist on bigger herd size objectives. Under HB 125 this yields the potential for a perpetual escalation of the war on cougars, bears, and coyotes.

And think of this too: No consideration at all need be given to the negative impacts to the land, the plants, the waterways, other species of animal, or to the health of ecosystems that such a practice will surely cause. The core ideas underlying HB 125 are (1) the highest good is a maximum number of ungulates for hunters to kill, and (2) reducing the number of predators will inevitably result in more ungulates and no problems. This the very same fallacy that Aldo Leopold bought into in his youth, which he later admitted was a mistake, and that led to massive herd die-offs on the Kaibab Plateau and resulting very severe habitat destruction. 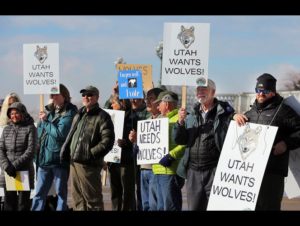 A highly endangered, desert-adapted subspecies of the northern gray wolves, Mexican gray wolves once ranged from California to Texas and as far north as Nebraska. An extirpated native of Utah and Colorado, today Mexican gray wolves number just 114 in the wild in Arizona and New Mexico. Another 30 or so are in Mexico.

Wolves have long been a focus of Western Wildlife Conservancy’s work. Director Kirk Robinson and board member Allison Jones served on the Utah Wolf Working Group in the early 2o00s. WWC is part of the Rocky Mountain Wolf Project and Lobos of the Southwest.

Western Wildlife Conservancy campaigned to get public comments, in favor of returning Mexican gray wolves to Utah, to the U.S. Fish and Wildlife Service during their comment period for the Mexican gray wolf recovery plan. Although clearly supported by the science, the final recovery plan released in November 2017 did not include Utah and Colorado in the recovery zone. WWC also campaigned in Arizona and Nevada, generating phone calls in opposition to anti-wolf legislation to U.S. Senators in the spring of 2017.

We continue to inform Utahns on the need to restore both northern gray wolves and Mexican gray wolves to our landscape through our tabling projects and social media work. We want to hear wolves howl in the Bear River Range, Uinta Mountains, Wasatch Plateau, Abajo Mountains, Dixie National Forest, Grand Canyon National Park, and the San Juan Mountains (among other places). Utah and Colorado need wolves. Wolves need Utah and Colorado.

We work with the Rocky Mountain Wolf Project

Would you like to hear wolves howl under the full moon as it rises over Tokewanna Peak in the Uintas or Tukuhnikivatz in the LaSals?  Do you want to take part in making it happen?  If so, you now have a great opportunity to help.
The Rocky Mountain Wolf Project, which is working toward restoration of the gray wolf to western Colorado, needs to raise $100,000 for the next phase of its effort to educate Colorado citizens about the wolf and to promote the values of wolf restoration.  And if wolves are restored to Colorado, there is no doubt that they will soon spread out as the population grows, so that many wildlands of eastern Utah will once again be home to their missing keystone predator: Canis lupus.
There will be many ecological benefits to this rewilding, as well as an enhancement to the wilderness experience.  Go to the website below and watch the 1 minute video to find out what it’s all about.  Then make a contribution.  Contributions add up.  If 200 people each make a $10 donation, it equals $2000.  If 200 people in each of the 50 states do this, the RMWP will have reached its fundraising goal for the next critical phase of rewilding the Heart of the West!